When you get a group of crusty, cynical old reporters together in one room, someone is bound to become the victim of bold and brash banter.  I remember well, Drue Smith, a senior member of the Tennessee Capitol Hill Press Corps, who would sit silently while all the cub reporters took turns trying to ask the one question that would tip the scales in their favor.

She would always wait until the end of the news conference, and then in a long southern drawl, she would inevitably ask, “Gov-en-uh, what’s the bottom line?”

Frequently, laughter would erupt in the room as we were all certain the topic of the day had been tossed about, sliced, diced and served up in every direction possible.  But, more often than not, the last laugh was on us as the Governor summed up his responses to all of our many questions in the single most concise quote of the day.

It’s sort of funny how the topic of faithfulness could bring that story back to my mind.  I remembered it after asking my husband what he thinks first when he hears the word “faithfulness.”  He didn’t give it much thought; he just said:” The bottom line!”

Isn’t that what we really want?  Someone who would be there for us no matter what?  Someone we could trust completely, lean on totally? 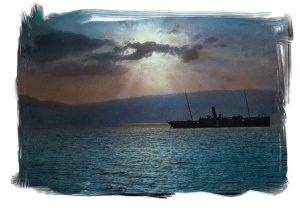 In one of the world’s most majestic miracles, God parted the Red Sea allowing the Israelites to cross on dry ground in order to escape their enemies.  But, only three days later, they were miffed with Him because there was no water to drink.

In the New Testament, Jesus was just as faithful.  He stuck by His apostles even though He was doubted, denied and left to fend for himself.  In fact, you might remember, it didn’t take the apostle Peter as long as it did the Israelites to fall from faith.  As Jesus was about to be arrested, Peter declared his allegiance to him.  But that very same night Peter denied the Son of God three times.

What was the response?

Jesus was faithful to forgive.

Moses became angry and struck the rock when God had clearly told him to speak to it.  God still gave him water.

David had both eyes open when he turned from God and let his lust take the lead.  David was disciplined but then comforted by a loving and loyal Father.

Jonah ran from God, but God provided transportation to bring him home and give him a second chance.

Paul executed Christians, yet Jesus blinded him temporarily to help him see.  You don’t get much more of a “no matter what” example than that one.

his crucifixion and resurrection, Jesus stood still, so a doubting Thomas could reach out and touch his nail-scarred hands in order to believe.

I could keep going but I suspect you get the point.

I’ve always thought if we had lived “back then,” we might have been a bit more faithful.  After all, the Israelites got to follow a cloud by day and a fire by night.

God was their GPS!

But then I remember He actually gives us an instruction book and we still try to come up with our own plan.  Even then, He understands and is faithful to all of us.  No matter what we do, no matter how hard we struggle, no matter how many times we mess up, how often our quick tongues or tempers get us into trouble or how unfaithful we become…it does not change the fact that He is faithful.

And, I’ve got to tell you, I really believe even a crusty cynical old reporter might agree that is the Bottom Line!

“Our confidence rests not in our faithfulness but in His!”

“If we confess our sins, He is faithful and righteous to forgive us our sins and to cleanse us from all unrighteousness.”

To whom are you faithful?

What about when they make you mad, disappoint you, sin beyond what is acceptable in polite society, embarrass you or make themselves look foolish?

Who are you faithful to, no matter what?

What is your bottom line?

**Until I wrote this post and contacted Drue’s daughter for a photograph I had no idea all that Drue had accomplished.  She was a faithful woman whose colorful life story is definitely worth reading**

There is a phenomenon of social interaction known affectionately                 as “The Nashville Handshake.”

It does not include a toothless grin, as some might perceive our southern stereotypical status, but rather a shifting of the eyes beyond the person you are greeting.  It’s a casual glance to see if someone more important has entered the room…an effort to eye someone with celebrity status, power, prestige or possibly with potential career building capabilities.

It seems we weren’t the first to coin the concept.

Suppose a man comes into your meeting wearing a gold ring and fine clothes. And suppose a poor man in worn-out clothes also comes in. Would you show special attention to the one who is wearing fine clothes? Would you say, “Here’s a good seat for you”? Would you say to the poor person, “You stand there”? Or “Sit on the floor by my feet”?  If you would, aren’t you treating some people better than others? Aren’t you like judges who have evil thoughts?

But you have put poor people down. Aren’t rich people taking advantage of you? Aren’t they dragging you into court?  Aren’t they speaking evil things against the worthy name of Jesus? Remember, you belong to him.

I suspect there are endless examples of why treating people with favoritism can backfire on the most well-intentioned person.  Three come quickly to my mind.

One happened several years ago when we became part of an “in group.”   It consisted of popular, powerful and wealthy men and women in the process of working to build a new meaningful project.  Okay, let me come totally clean.  We weren’t completely “in” the “in group,” but we were welcomed on the periphery where many of the volunteers spent their time.  We were comfortable there and had a seat up close to the sidelines when it came time to watch the show.

There were actually two groups.  Group one consisted of the founder, leader and his administrative staff.  Group two was a much larger body of overseers and their wives.    I’m not sure who tried to impress who more.  There was a lot of “Here’s a good seat for you” kind of stuff going on.  Eventually the two groups imploded in a flash fire of self-importance and pride.  I don’t think anyone was ever dragged into court but there were a few dragged through the mud.  It didn’t matter which side you were watching, or whose version you were hearing, it was UGLY!  People were hurt, property was lost, reputations were severely damaged and the house divided could not stand.

It’s been many years since then and from our current view, in the cheap seats, it doesn’t appear as if either side has ever really recovered.

The second situation was somewhat similar.   But there were only two primary players.   The leader and the nemisis, who wasn’t a celebrity but was married to one.  We were way out of the loop, as were a lot of other people, until the walls inevitably came crumbling down.  Then, there was an effort to garner support, and those on the outside were invited in.  Pride and position, once again, proved to be powerful tools of division.   The person sitting “in the front row seat” eventually won the war; the leader left and the doors closed.  One side seems to have survived while the other still struggles to recover and begin again.

If you really keep the royal law found in Scripture, “Love your neighbor as yourself,” you are doing right. But if you show favoritism, you sin and are convicted by the law as lawbreakers.

God has warned us to watch out, yet we still cast our eyes on others, looking for opportunities that will be beneficial. Sometimes…we get burned.

The most recent example I have seen, happened in a family.   A house of cards, with enough smoke and mirrors to look like The Lives of the Rich and Famous, prompted a few people to turn their heads and look that way.  The favored were ushered in and given priority seating.  But things are not always as they appear.  When their silver spoon started to tarnish, they turned to bite the very hand that fed them.  I’d like to say those of us who were watching were surprised, but…not so much.  The Bible is right.   Some people will accept your hospitality and then turn on you when things get tough.

I am not immune from name dropping and I have spent my share of time taking part in “The Nashville Handshake.”  God has blessed me with many opportunities and I have met a few powerful people.  I admit, there have been times when knowing the right person helped me get things done; but not one of those associations ever made me rich, famous or more important.

God is my provider.  He alone is my refuge, an ever present help in trouble and a friend who sticks closer than a brother.

So, before I cast my eyes beyond the next person God places in my path… I pray that I always remember His words of wisdom:

Let your eyes look straight ahead; fix your gaze directly before you.

Who has God placed in your path?

Do you see them, or are you looking past them?