The iPhone ping came in at 4:59 AM, exactly one minute before our scheduled departure at five. It was a notice from our bank warning us that we only had $27 in our checking account, significantly less than the $100 minimum we set up as an alert point. Ironically we were about to leave on a

seven-day Eastern Caribbean cruise, a vacation that had been purchased months earlier when the bank balance was much higher.

I dug deep into my resolve, remembering the words in Proverbs 31. She laughs at the days to come.

I knew God had already been with us as we planned the trip. It was actually bought with someone else in mind. Circumstances changed and that someone decided not to go. And, even though the cruise coordinator assured me we could not get our money back, I asked if I could speak to a supervisor and explain our situation. While I was on hold, I got down on my knees and thanked God for his favor. When the coordinator returned to the line, she was way more astonished than I. “This has never happened before,” she said, “but we are going to give you a full refund for the fourth person.” It’s times like this when I feel like it’s okay to move forward. So despite no real desire to go on a cruise, except to take the person who now wasn’t going, we were about to leave home.

“Is this a mistake? How did this happen?” These were among the questions my husband and I were asking ourselves, still mulling over the timetable of leaving on a vacation when the check we needed to pay additional expenses had not made it to the bank on time. We pondered all the possibilities and recognized that not going would only cause us to lose the money we had already spent and wouldn’t do anything to help the situation with our account. 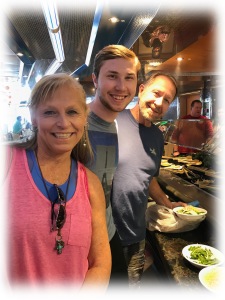 So, instead of stepping OUT of the boat on faith like the Apostle Peter, we stepped on to the boat knowing our financial circumstances were completely out of our control. Tropical music, the smell of sunscreen, and the unlimited food buffets went a long way in allowing us to forget our finances.

But, now seven months later, we’re not so sure our trip had anything to do with our faith walk, our finances, or a family vacation.

Shortly after we settled into our new normal on the ship, a particular photographer captured our attention. And, a Divine Appointment started coming into focus.

I thought it was her haircut that caused her to stand out. She had those super short bangs cut straight across. But, the more we watched, the more it seemed her ability to be an amazing ambassador was what intrigued us. Out on open water, we saw her on the pool deck, the walking track, down on the dinner floors and then at the gangplank for destination stops. Each time, she was smiling and happy as she took hundreds of photos. Keep in mind, there are many other photographers on the ship but we just kept seeing the same one.

A Christmas concert, we would normally have not attended, ended up on our itinerary when the cruise director promised a snowfall. It did snow; it was spectacular, and there she was again taking photos in front of 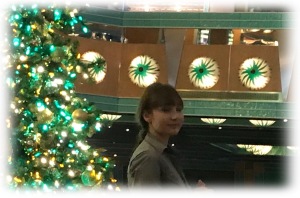 the tree. This time, we talked with her at length. What she shared with us is that, in order to take all of these family photos she has to leave her family, in the Ukraine. She’s married, has a young son, and spends six months of every year on a ship along with her husband so they can earn enough money to support their little boy. Just as astonishing, she’s only working as a photographer. In reality she’s a singer. But, isn’t everyone? We’re from the Nashville area and…well, we’ve heard that story a few… dozen… hundred times.

We see her again and again…talk to her every chance we get…offer her encouragement… and continue on with our cruise.

The last day came quickly and, as usual, all those guests so anxious to get on the boat are just as much in a hurry to get off. So, we found the only seats available to wait it out and there she was once more. It seemed clear to all of us that at this point exchanging email 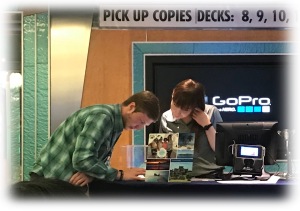 addresses and Facebook information was quite appropriate. She showed us a photo of her little boy, we shared some pictures we took on the trip, and we said goodbye.

In the days that followed, we actually found her on YouTube and realized that this “would be singer” really IS a singer. There are several videos and hundreds of thousands of viewers. This beautiful young woman was working as a photographer on a Carnival Cruise Ship when she has an amazing voice and a large online following. There are so many shows that involve music; it just didn’t make sense that she was taking pictures.

We had already been praying for her. But we decided it was time to go boldly to the Throne of Grace, as she so deserves to be recognized for the talent God has given her. Even so, there was still a heavy burden to say something, to do something, to reach out to Carnival on her behalf. So when our post cruise survey finally arrived, we took great pleasure in pleading for someone at the top to see the singer who was standing right there in front of them on their own ship.

And just as quickly as she first caught our attention, news came that she had been selected to

sing…not on the ship we were on…not the one where she worked as a photographer. No, she was chosen and called to perform on one of the newest and best ships in the fleet.

Did our letter reach the executive branch at Carnival Cruise Lines? We have no idea. Did God answer months of prayers for Lidiia? Prayers were certainly answered, but I feel sure we weren’t the only ones praying. The Bible tells us if we delight ourselves in the Lord, He will give us the desires of our hearts. Lidiia delighted in the photography job God gave her to do, and she did it as if she were doing it for the Lord.

She messaged this week to let us know her first few shows went really well. It’s still a bit surreal for her as it all happened so slow and yet so fast. Dreams that come true sometimes seem that way.

As I type this story, she is somewhere out in the Caribbean, in the center of a soundstage, on one of the newest and largest ships to set sail.

She’s in the spotlight…she’s singing…and this time someone is taking her photo.

Our cruise started on a Saturday and by Wednesday we got word that the check we needed had
arrived back home. The person who was supposed to go on the cruise was actually the one who 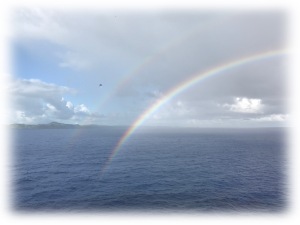 took it to the bank for us. We had only one bill due, so I paid it with a ship to shore phone call, and laughed at the memory of our $27 bank balance.

“Be joyful in hope, patient in affliction, faithful in prayer.”

“Let us then approach God’s throne of grace with confidence, so that we may receive mercy and find grace to help us in our time of need.”