Age is just a Number!

We have a saying around our house that “Pink is just a color.”  Our son spoke those words at age nine after discovering his 18-year-old sister’s 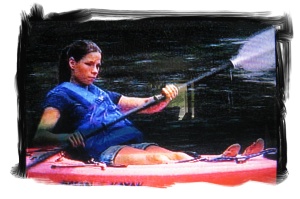 pink kayak would navigate the river waters much smoother than the blue one he just “had” to have.

When I woke up last week as a 50-year-old woman, and laughed at the very thought of it, one of the first things that went through my mind was “Age is just a number.”  I flipped on the morning news and they were actually doing a segment called Minivan Mom turns 40.  I laughed again.  As I sat there staring at the television, I realized I was now ten years older than the woman being interviewed.   She had previously set a boundary for herself, based on what she was willing to do or not do, to stop the aging process.  But as the wrinkles worked their way around her face, she changed her mind, and was now  boasting that she would in fact bet on Botox.

Now, I’m a big fan of refusing to age gracefully and fighting it every step of the way.  But it seems we might need fewer miracle cures if we didn’t always worry and complain about how old we are, how bad we feel, what hurts, or all the things that are wrong with us.

Our son, who says “Pink is just a color,”

also came to me one day and said, “You know Mom, ten people can say nice things to you.  But if one person says something mean or bad it’s all you really remember the rest of the day.”  So, so, true.

But who speaks negative words over us more than we do?  I’m too skinny,  I’m too fat, my arms are flabby, I am such an idiot, I’m so forgetful, I’m getting old, I feel terrible, I have a headache, my back hurts, my knees ache…you know what I mean.  Don’t get me wrong, I have both feet in this boat too.  I do try to REMIND myself as OFTEN as possible that God spoke the world into existence.  His words have the Ultimate Power.  He didn’t just think “Let there be light,” He spoke it.  He didn’t just ponder in his heart, “Let us make man in Our image,” He said it.  All throughout the Bible, there are examples of healings by Jesus and the apostles where words were spoken over the people who were sick.  Jesus raised the dead with words.  In the Old Testament, a father’s spoken blessing carried so much weight that, once said, it couldn’t be recanted.

Now you may be wondering how a story about age ends up being about words.  I was sort of wondering that myself.  But a birthday has No Power over me.  It’s the words I say to myself that will determine if I’m a young, energetic, just getting started 50… or an almost ready for rocking chair retirement half-century.

And I am here to testify, Age is just a number! 🙂

Sweetness to the soul and health to the bones.”

**Despite a wonderful, “real surprise” party 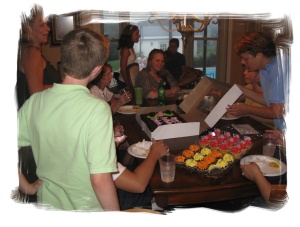 thrown by my husband, son, family and friends, my mind kept returning for days afterwards to the fact the house hadn’t been cleaned for guests nor the lawn mowed.  I spoke those words over and over until I began to feel burdened by what “didn’t happen” rather than joyful for “what did.”  I am trying to take those thoughts captive and further tame my tongue.  After all, I did ask God that very morning to help me with my control issues. **

Have a wonderful week.  Say something nice to yourself, lift someone up encourage those around you.