The first ride of the day often starts with a horse sneezing on the back of our bare legs. It’s usually followed by horse hooves kicking hot sand a couple of feet in the air to stick and stay right below the back of our knees.  The grains of sand that aren’t picked 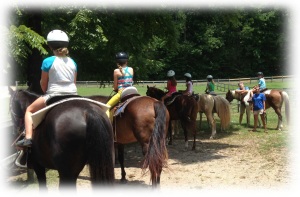 up like little hitchhikers jump in the back of our boots. Sweat is already seeping into our socks to join the water sloshed in there that morning while we were filling eight individual buckets. We’re about to take a test ride around the arena to see if we dare leave the safety of the sand and the security of the fencing.  And, it is now when the stress level slowly begins to creep its way up.

Children who sometimes boast of their riding skills realize they are still beginners. Those who have taken English lessons on a tight rein try to wrap their understanding around a Western trail horse that wants the freedom of its mouth. And while many kids ride for the very first time, thrilled with what is finally happening, others are in tears begging to be brought back down on solid ground.

There are four of us. Two directors. Two counselors. There are 16 of them. Eight kids. Eight horses. We usually have 20-30 minutes to get all the kids on a horse, get them going in the same direction, get them to listen to us (the kids and the horses) and override each and every opportunity our equine friends find for mischief. You know the old saying, “You can lead a horse to water but you can’t make it drink”? Well, it’s true! It’s also bankable information that you can take well-trained horses, put them in random riding situations every hour for five hours, and see them react in ways that will either throw your heart into overdrive or melt it in one memorable moment. Our emotions, if monitored during one ride, would look like an electrocardiogram right before a heart attack.

The intensity can be indescribable, while the satisfaction at the end of a good ride can be quite soothing. But, what is constant in our world of unknown equestrian circumstances is a greeting we often receive, if and when, we venture out of the arena onto the open trails.

The young woman easily voted Counselor of the Year at our children’s farm day camp is so full of light that she helps all of us walk right out of the darkness. Just those two words, “Hi friends,” spoken in genuine kindness, sincere sweetness and a directness that makes you feel as if you are here among the best of friends…those two little words carry amazing power.

We see her, we hear her, and we know her heart for the children, the horses and us; and, with those words, our fear washes away, our stress is released, and even our legs, still gripping grains of sand, feel strong and determined to walk the road ahead.

In a place where my words look for ways to join in the cacophony of complaints, Miranda chooses her words carefully.  She is quick to listen and slow to speak, and like Proverbs 12:18 tells us, her wise words bring healing.

If asked about her life, I would have supposed she had an idyllic childhood. I would have further ventured to guess that she has been so much the center of someone’s attention, the art of making other people feel special, just came naturally to her. But what I’ve found out is that her life has not always been fairy tales and princesses.   She’s had some struggles along the way…she rises above them. Instead of focusing on herself and “what could have been,” what “might have been,” or what “she may have missed,” she looks out ahead of herself for the next face she’s about to see.

During a recent late night dinner, a bunch of us were gathered around a table at a 24-Hour Steak and Shake. I was on the 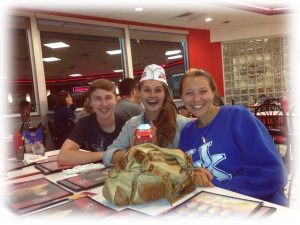 opposite end and wasn’t always privy to her conversations. The next day, I was told she engaged others in a way they had never experienced. Full on, eye-to-eye, completely engrossed in what they were saying and obviously, genuinely interested. Those who might have felt awkward, uncomfortable, or on the outside of the little group, were immediately put at ease, welcomed in, and not just made a part, but an important part of all that was happening.

In a world war-torn by angry and aggressive words, where what we want to say often outweighs what others might care to contribute, she honors others above herself. 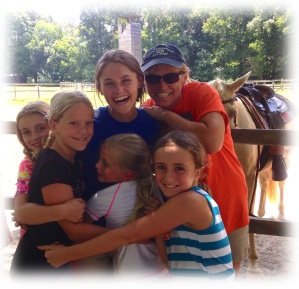 It’s why we all wanted to spend time with her. It’s why the kids clung to her, crying, begging, and not wanting to leave even though it was time to board the buses.

Sumer camp is over

The horses are grazing gracefully in the pasture as if nothing ever happened.

And, Miranda’s life is about to change. She’s on her way to a big exciting city to pursue a graduate degree in social work. She’s confessed her fears and little bouts of anxiety. Still, she knows not to worry about tomorrow, for God has promised tomorrow will take care of itself.

Her wise words will bring healing in her new exciting city as they did at our dusty hot summer camp. Proverbs 13:2 tells us she will be blessed because of the words she chooses. Just those two words that wield such amazing power.

I did it His way