As I Walk through the Valley on Shadow

There’s a line between wisdom and insanity that gets blurred, every time anyone willingly comes into

contact with Shadow.  He’s a kind, loving and obedient boy, but make a move he’s not expecting, and he’ll 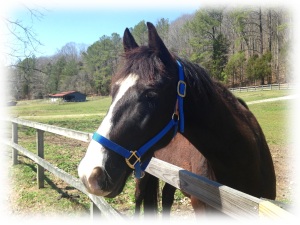 We love him. He’s beautiful.  He’s a gentle herd leader. And he is truly something to see when he reaches top speed running across the

pasture.  But trust him?  Not a chance!  He doesn’t just spook, he spooks at the same things sometimes, not at all other times.  When you expect him to spook, he doesn’t; and when you don’t expect it, he does.  You can never be sure.

Shadow supposedly had lots of training before we bought him, and we were told he had worked at a kid’s camp for years.  So, given that we were looking for a “kid broke” horse and he was ebony black and beautiful, we bought him.  Paid money.  From our perspective, quite a bit of money (relative to the budget) and we confidently brought him home to join our other (free) horses.  They’re the ones that haven’t had much training, but can likely walk through a war zone with only a slight tremble or twitch. Shadow will run from his own lead rope.

It’s fear, plain and simple.  We’re not sure why or what his history might be.  He is a registered Tennessee Walker, with a long lineage of family champions, and there’s a strange little quirk about him when he sort of bounces up high before he trots; but what his early life must have been like before us is an unknown.

What we do know is he is very afraid…not always… and not on any recognizable timetable… as best we can tell.  It’s more like the movie, Groundhog Day.  What he learns not to fear today, he will freak out over tomorrow.

And, this is why I now think we may all be just like him.

In an attempt to get Shadow some help from someone other than myself; I was making a video to submit to a master horse trainer, showing Shadow’s sporadic spooky behavior.  As I was explaining how Shadow can be desensitized to scary objects one day, but is afraid of the same objects another day, the realization of what I was saying was not at all something I wanted to see in myself.  But, unfortunately I think it’s true.

I get afraid.  God calms my fears.  I realize there was no reason to be afraid.  And, then, confronted with the same things that scared me before, I’m afraid again.  This is an agonizing epiphany.  We worry 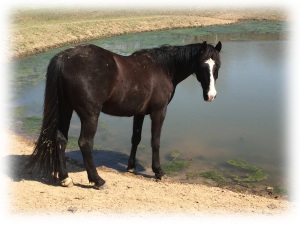 about Shadow.  We stress over Shadow.  We don’t understand Shadow.  We make fun of Shadow.  And, yet, he’s a walking, talking testimony of what we need to work on in our own lives.

Let’s take money and bills for example, because that’s one of “my things” that causes me great fear.  I’m afraid of a bill we can’t pay.  God provides, as he tells us over and over in His Word that he will.  The bill gets paid. I’m no longer afraid.
Then another bill comes.  I look at our account and there’s not enough money to pay it.  But, it comes due and somehow (thank you, God) it gets paid.  I’m no longer afraid. Until…

Maybe it’s not money for you. Maybe you’re afraid of your mother-in-law…maybe it’s your boss…you’re afraid your husband is going to cheat on you even though he never has and never will…maybe you’re afraid to fly even though you’ve always landed safely.  Yet, that SAME fear keeps coming back again and again.  Shadow is a shining example of what happens.  He’s supposed to be

a “kid broke” horse and yet he can’t live out the life that was intended for him, because fear (False Evidence Appearing Real) has rendered him incapable.

You may have heard this before, but fear is the topic most often addressed in the Bible.  Our fear is no surprise to God. He knew this was going to happen.  He prepared all these many verses for us.  Right now, I’m thinking, “If Shadow could only read,” but the fact is, I can read, and I have read the verses and it would probably help me to go read them again.

There is always going to be a bill coming due.  And, until I learn not to be afraid the next time, God is going to have to desensitize me to it this time.  He often turns up the heat until we can handle the pressure.  Remember the Israelites 40 year journey around an eleven-mile mountain? God wants to get us where he wants us to go, more than we want to get where we want to go.  But, we have to be willing to give up our unhealthy relationship with fear.  Fear is an enemy intended to keep us from fulfilling our intended purpose.

We’re still trying to teach Shadow, but maybe now it’s just time to stop for a minute and learn from him.  We can bolt and run, or we can hide under the shelter of God’s wings, and in doing so, be reminded that First John 4:18 says there is no fear in love because perfect love casts out fear.

After all, a shadow is just an obstruction from THE LIGHT!

Who knew more about fear than David the shepherd boy?

The Lord is my shepherd; I shall not want.

He maketh me to lie down in green pastures: he leadeth me beside the still waters.

He restoreth my soul: he leadeth me in the paths of righteousness for his name’s sake.

Yea, though I walk through the valley of the shadow of death, I will fear no evil:

for thou art with me; thy rod and thy staff they comfort me.

Thou preparest a table before me in the presence of mine enemies:

thou anointest my head with oil; my cup runneth over.

Surely goodness and mercy shall follow me all the days of my life:

and I will dwell in the house of the Lord forever!

Learning to turn away from the crooked road of fear

will lead us straight to the gateway of freedom.

Shadow and the tarp

Time is money.  We know this.  We have heard it most of our lives.

We have seen it in action.  A doctor who has to see dozens of patients in a day to pay high insurance premiums, a lawyer offering legal advice to as many defendants as the court system can handle or a single mom working two jobs to feed four kids will all tell you that time is money.

So the idea of stopping long enough to spend time with God, when we can’t see Him, often can’t hear Him and who doesn’t always answer our prayers the way we would like, is sometimes asking more than we are willing to give.  After all, time is money, and if we have enough money, everything else will run smoothly in our lives. Right?

How much is enough?  For one of the wealthiest men in history, John D. Rockefeller Sr., it was “Just a little bit more.”

Where do we spend most of our time, our quality time?  Is it possible to invest in time 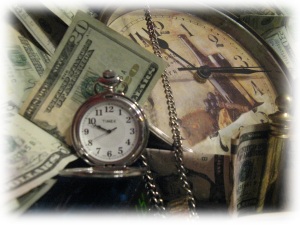 and reap the dividends like a savings account or stock portfolio?  I bring this up now because I’ve been spending a lot of my time lately fighting the clock.

There are people in my life, people I love, who need my help, people who want things, projects on deadline, a house to clean, laundry in piles, dogs to feed, horses covered in cockleburs, holidays coming quickly and I can’t seem to stop long enough to do the one thing that would actually save me some time, if I would just take the time.

The go-to quote, in times when I need more time, comes from a friend’s grandmother.  I’ve shared it before.

“Now you come on and get up out of that bed.

You know any time you give to God, he will give it back to you”

It’s so true!  But it still didn’t get me out of bed any earlier.  I was already getting up before the sun.  However, a couple of days ago, I forced myself to try and re-focus on what God wants.  I prayed every time I realized I wasn’t praying, or hadn’t prayed, or really didn’t want to pray.  It didn’t get any easier.  I still didn’t feel His presence, or see any signs of the stress lifting from the load I chose to carry.  One of the biggest projects I’ve ever encountered was coming up on its first deadline.  I needed time a lot more than I needed money, although, money was sort of the reason I needed time.  So, I kept going before God.

I kept waiting for a breakthrough.  And still nothing was happening.   I did notice my husband taking extra care to keep the kitchen clean.
Like a tiny little ray of hope darting out from behind a clump of ominous clouds, things seemed different.

The project made deadline, the dogs were fed, the horses brushed, there was extra time to spend a couple of days with my Dad, and a significant holiday gift just popped up while I was out doing routine shopping; and it was a fraction of the price I would have expected to pay at Christmas.  When I quit running around chasing the clock, God reminded me of all that had been done, and then, He just gave me this post.

What about you?  How are you spending your time?  Who is getting the most time?  Does God get any time?  Or is time just money?

“Therefore let us draw near with confidence to the throne of grace, so that we may receive mercy and find grace to help in time of need.”

I have often heard the story of Rockefeller’s money comment and just assumed it was associated with greed.  But when I read about his life, I discovered he was a believer, tithed from the very beginning… and the more money he got, the more he gave away.  In that case, how much would be enough?  A little bit more! 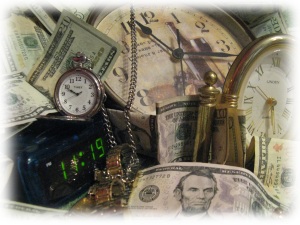